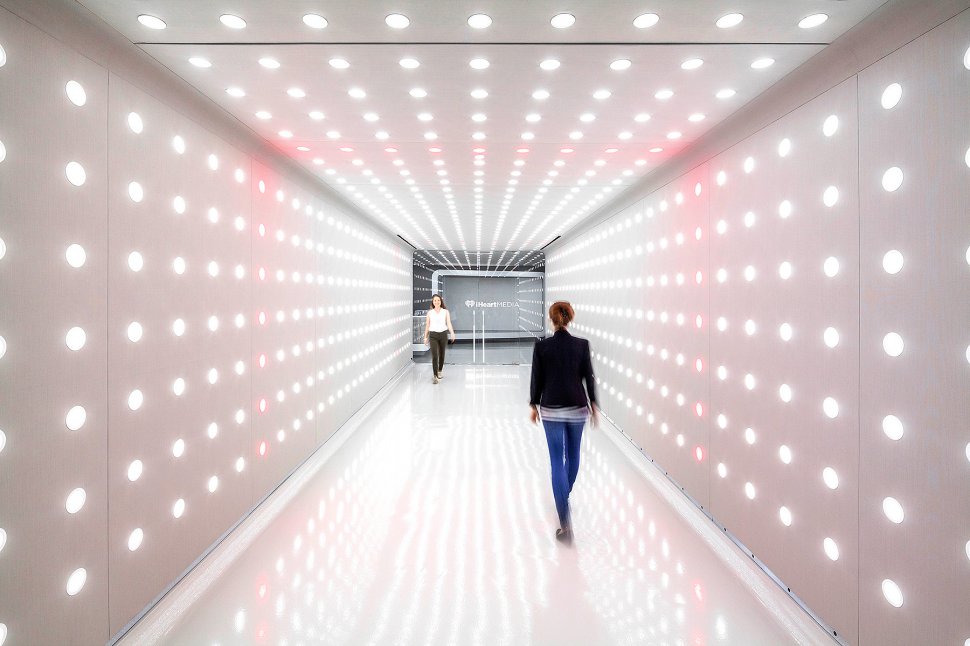 Inc.com have published a list of what they thing are the World’s coolest offices this year. There’s some lovely looking stuff here, although you can’t help feeling that the ‘Modular freestanding conversation pods’ will get used once, and then everyone will get back to working conventionally at their conventional desks. Take a look, do you agree..?

“Welcome to the fifth annual Inc. World’s Coolest Offices. These are some of the most beautiful, innovative, and just straight-up amazing company headquarters and startup offices in the world.

Within these offices are inventive, Technicolor conference rooms, spacious rooftop gardens, cozy nap nooks, and an indoor fire pit. But we didn’t select these offices as the best in the world simply for their sweet amenities or hip aesthetics. They also are cleverly designed to serve not just any company, but instead to fit the unique working habits of the particular employees who use the space. If there’s an overarching trend in office design this year, it’s customisation – and that goes a long way toward explaining why there’s a table that can seat 38 people, a floating conference room, and an elevated eagle’s nest in this year’s selections. Here is the full list of the coolest offices in the world in 2015 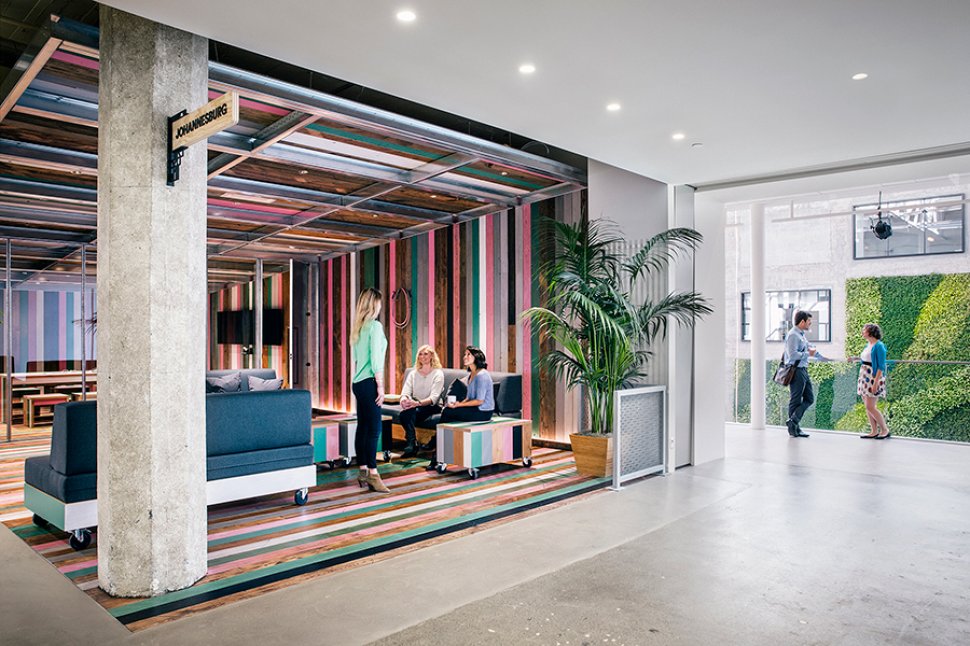 Airbnb: The Journey and the Destination
Time for a visit to Mumbai? How about Shanghai? For employees based in Airbnb’s newly expanded San Francisco office, such a trek requires going no further than a decked-out conference room or café corner. Each room is decorated to resemble a real Airbnb listing. It’s a theme the company began when it moved into its current Brannan Street office, and expanded upon in the new build-out of the third floor, with help from WRNS Studio and Interior Design Fair. Here, a colorful industrial residence in Johannesburg is channeled in a breakout meeting space. 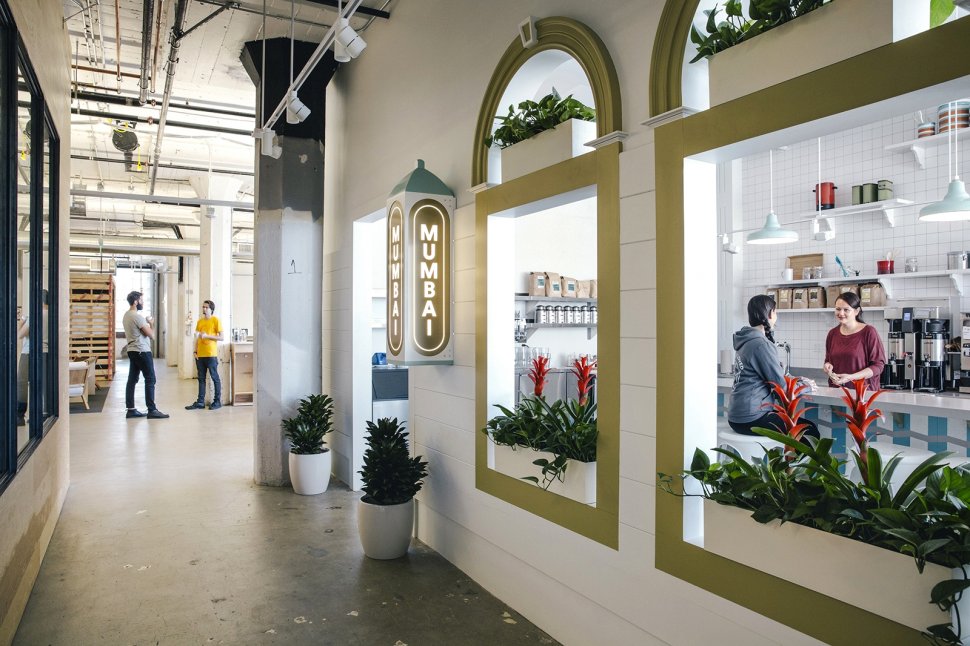 Design-School Vibes
Minimalism may be having a moment, but the Airbnb office scoffs at it. Great attention has been paid to myriad details in every corner of the 96-year-old former warehouse in San Francisco’s startup-saturated SoMa neighborhood. Seems apt, as two of the company’s founders attended Rhode Island School of Design. They are also used to pulling super-long hours in the office. “We spend the majority of our lives at work,” Airbnb co-founder Joe Gebbia told Metropolis magazine. “Why wouldn’t it be as comfortable or as inspiring as your own home?” 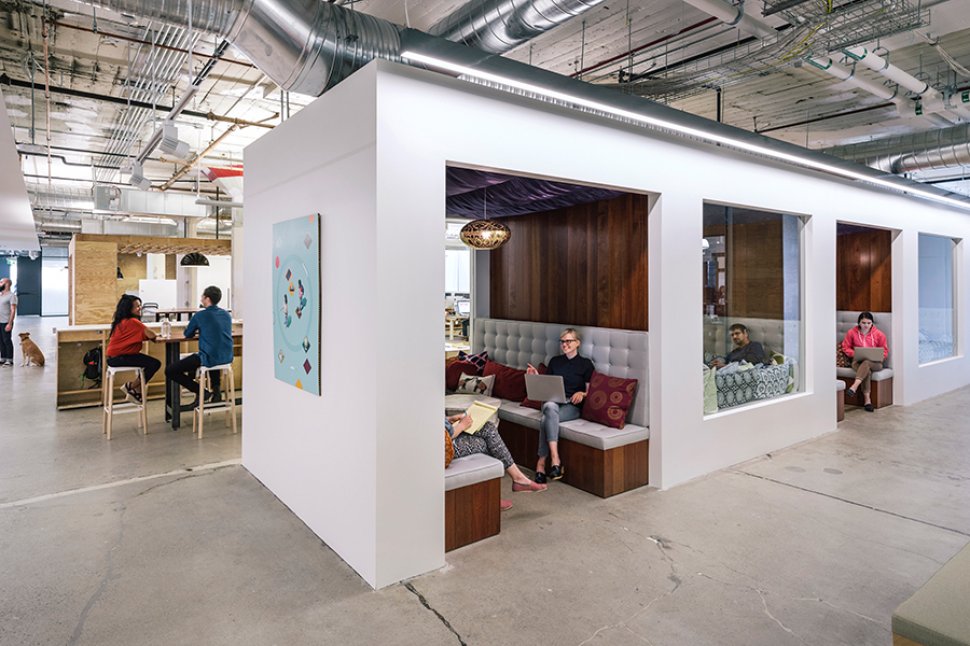 Talk About Growth
As Airbnb grows and grows and grows as a company–it’s now in 34,000 cities around the globe–it needed more room to stretch out its head count in San Francisco. Expansion also has shifted the needs of teams. In interviews before the new build-out, employees called for greater opportunity for small meetings or private conversations, good acoustics within an open office, and flexibility for the future growth of the company. 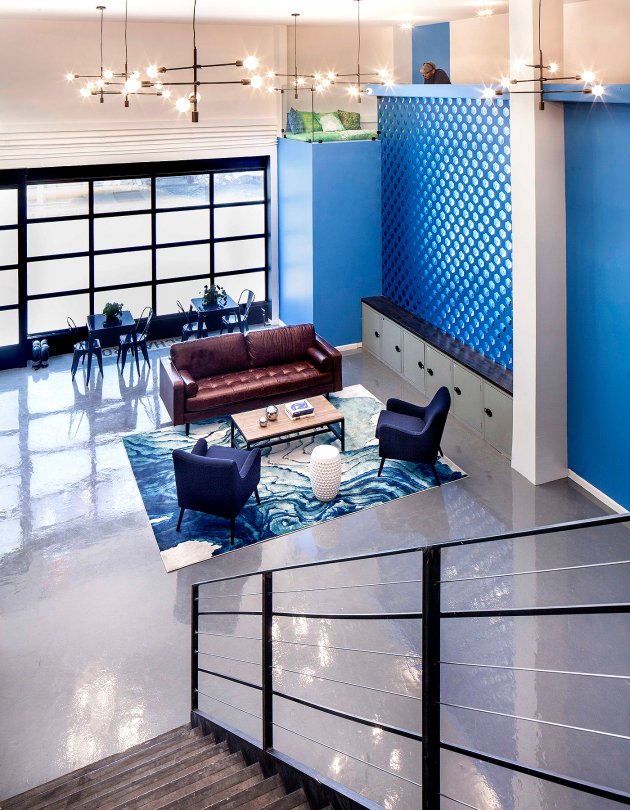 Bluecore: Playing With the PastWhen Justin Huxol, founder of Huxhux Design, was tapped by interior-design startup Homepolish to work on the new office for Bluecore, he was ecstatic. The email-marketing startup was moving to a three-story building on the Lower East Side of Manhattan that had been used as a liquor storehouse during Prohibition. Pictured here is the high-ceilinged lobby and meeting area, complete with a wall of custom wallpaper referencing Bluecore’s logo. Focus on the top center of the image and you’ll see a little elevated eagle’s nest, where an employee can curl up with a laptop–or just get a stellar view of what’s happening below. 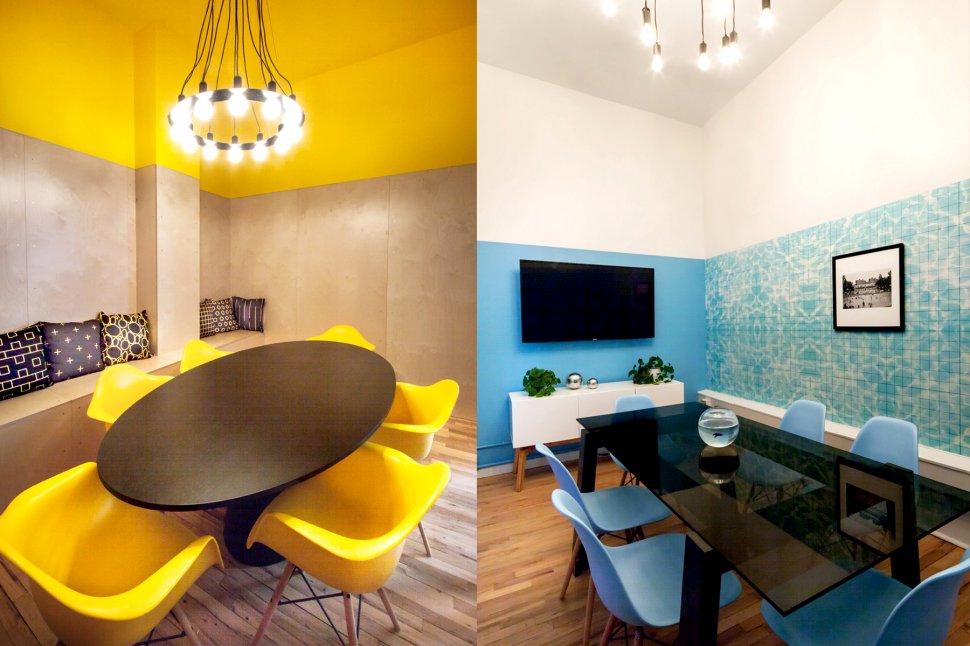 Bright Young ThingsHuxhux Design didn’t shy away from color in creating intimate spaces for this three-year-old company, and drew aesthetic inspiration from the neighborhood. The blue room is a nod to the nearby Hamilton Fish Park pool. Another conference room plays with the idea of a 1920s speakeasy. Huxol says he likes to consult with employees and design specific spaces that speak to them and their productivity. “It creates an overall environmental impact on your mood when you’re in the space and interacting,” he says. But, overall, spaces should be useful for the company–not strictly fun or too over-the-top. “It’s a challenge to keep it away from theater set design.” 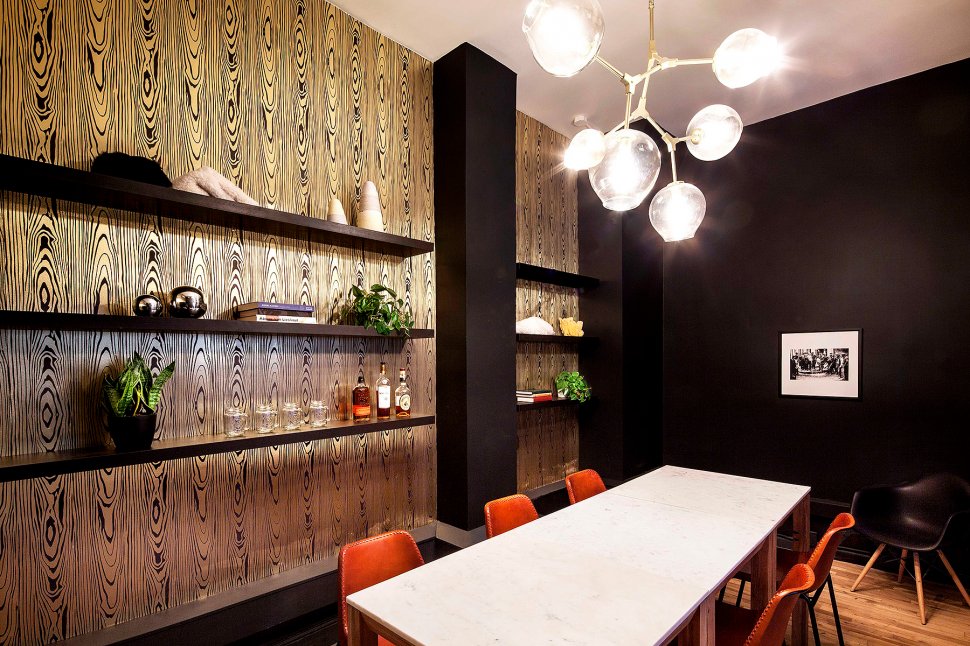 Paper Planes
In addition to the custom wallpaper designed for the entranceway, the speakeasy-like conference room, pictured here, features Huxhux Design’s Faux Faux Bois wallpaper. Aside from these breakout rooms for frequent meetings, Bluecore employees have another custom gathering place created just for them: a huge table. It’s a company tradition to stop working around noon and sit down together for lunch, so the design team brought in a massive table that seats 38 people. 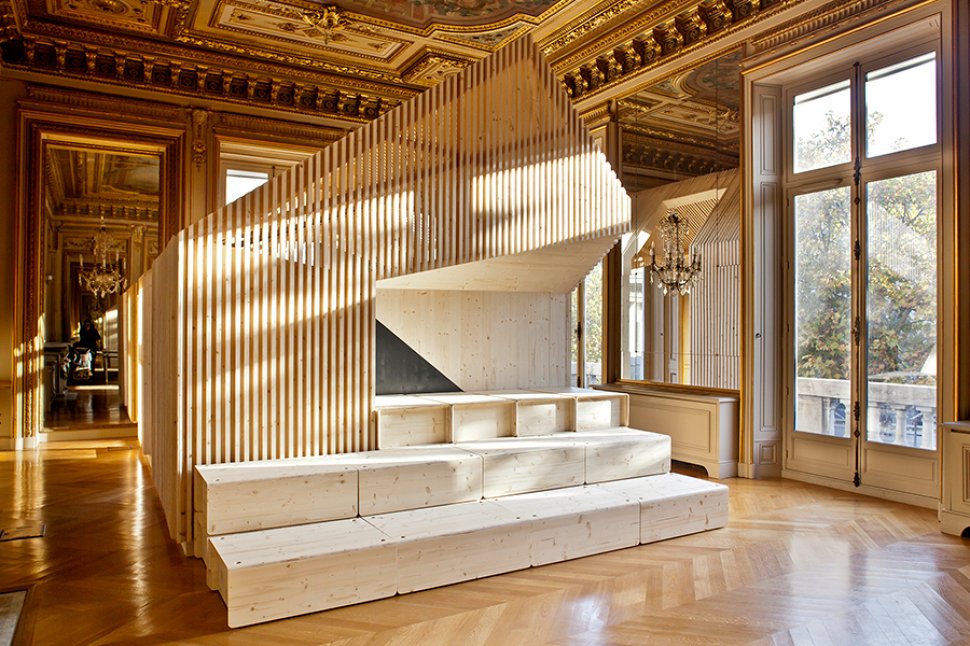 Ekimetrics: The Classic and the Modern
The chandelier-adorned and gilded open office block on Paris’s Champs-Élysées was almost perfect for Ekimetrics, a data-savvy marketing and consulting firm. The only problem was that the open 10,700 square feet lacked private meeting space. Architect Estelle Vincent hatched an extraordinarily creative solution: Construct inside it three thoroughly modern freestanding wooden structures of slated timber. They not only serve a variety of functions, but also provide stunning visual contrast between the classic and the startlingly of-the-moment design. 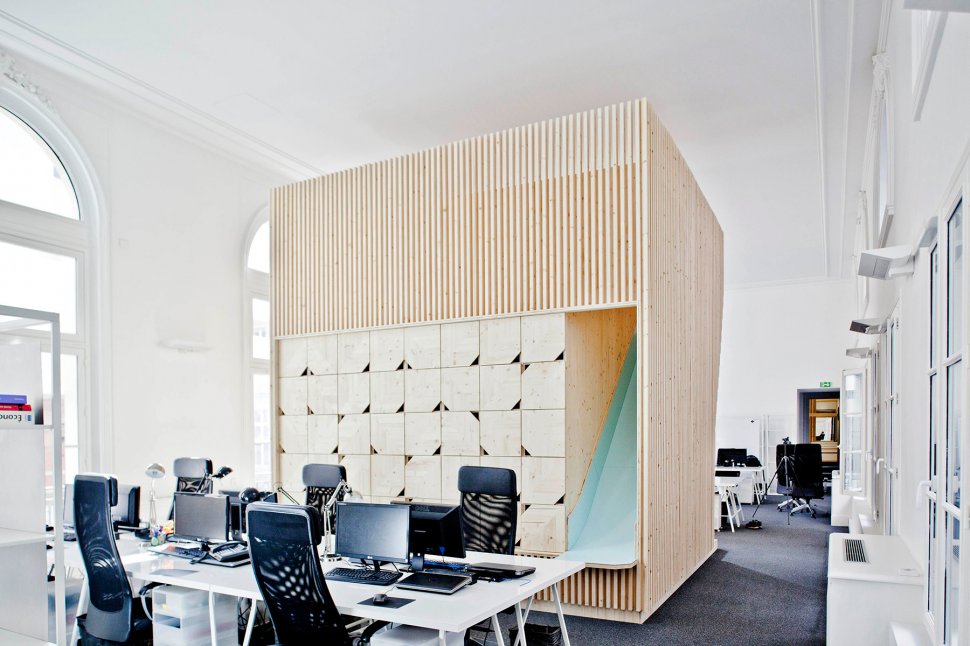 Whimsical Utility
The three freestanding structures serve as a boardroom, a two-person office, and a gallery. One of them contains 24 wooden box-stools that can be arranged for a larger meeting. Above one of the nooks is another meeting space dubbed the “crow’s nest.” Coming down? Take the slide.

Study in Contrasts
Centuries stand between the office’s shell–tall ceilings, arched windows, and chandeliers–and its brand-new wooden indoor structures. Despite the age difference, or maybe because of it, they fit perfectly. The unfinished timber nods to the structures’ own lack of permanence, and they feel agile and lighter for it. Some pieces are actually mobile, while others just feel like they are, such as the food truck-inspired staff canteen, dubbed “Eki Truck.” 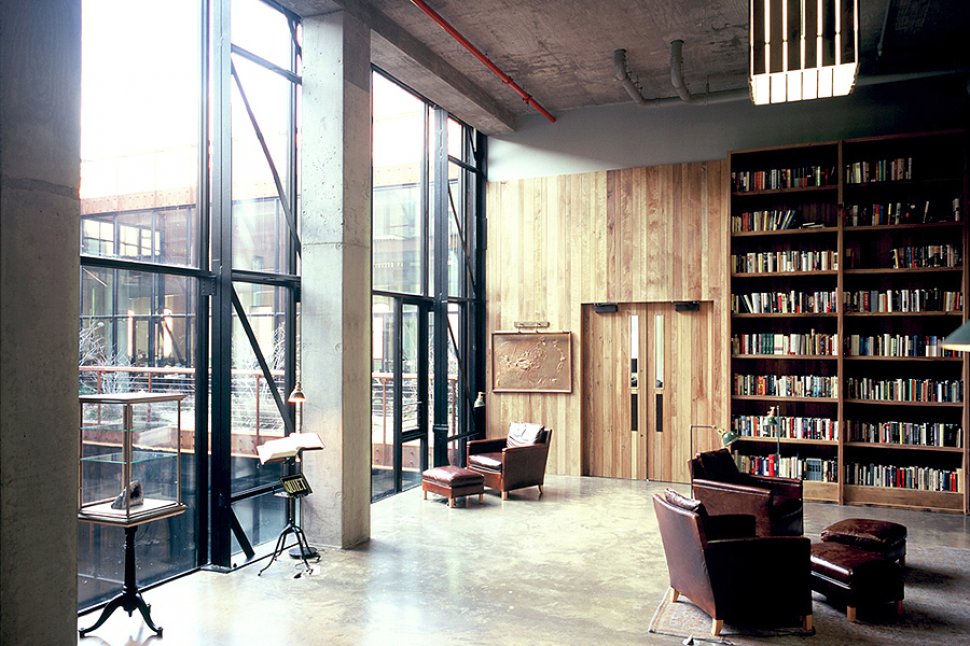 Kickstarter: The Speakeasy of Offices
Just a couple years ago, Kickstarter was outgrowing its home in a former tenement building on Manhattan’s Lower East Side, where workers did their dishes in a bathtub. The crowdfunding company’s founders knew that they wanted an office that was grand and that would make their employees feel delighted to come to work. But they also wanted to avoid a flashy Silicon Valley feel. They bought a nondescript building–a former pencil factory–not far from the East River in Brooklyn’s Greenpoint neighborhood, and brought in architect Ole Sondresen to transform its interior. (The exterior remains nearly unchanged; its doorway is simple and nearly unmarked. Very incognito.) Pictured here is a sweeping library, where employees can find quiet nooks for solo work on their laptops. 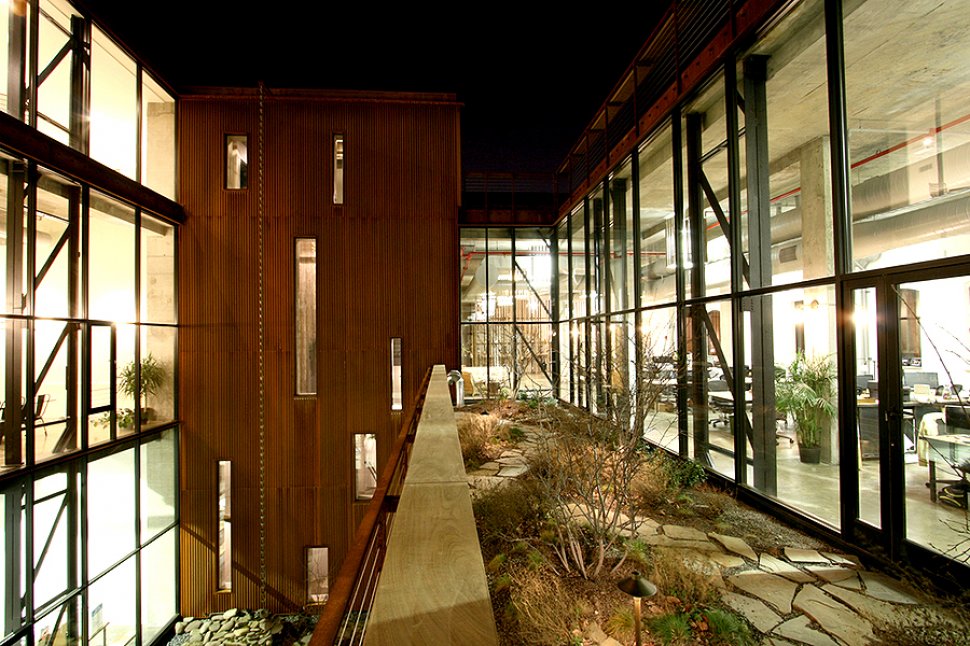 Sustainability, Inside and OutSondresen oriented the office around a central courtyard that stretches up to a second-floor garden and open roof deck, where employees like to eat lunch or hang out after hours. So despite the former factory’s thick brick walls, light pours into the space from above and from its central green oasis, illuminating it from its core. Glass walls for internal offices and other rooms let the light seep in. Nearly all of the construction materials and furnishings are reused or recycled materials: former roof trusses form the courtyard frame and old porch posts are used as legs for tables in the library, which itself is constructed from reclaimed wood. And roughly half of the materials used in construction were sourced locally. 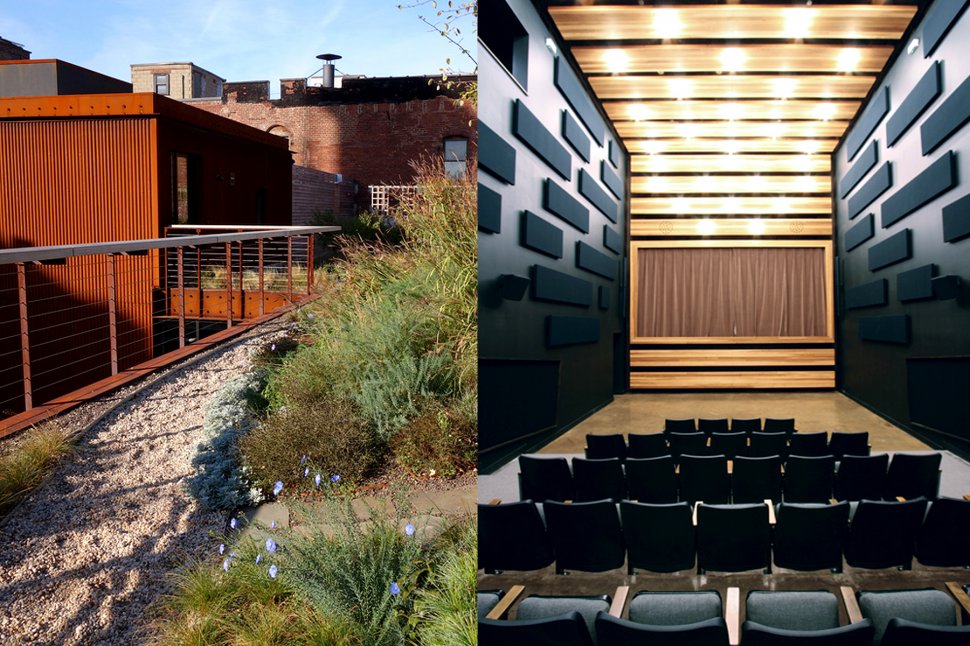 For Your Viewing Pleasure
Three floors of the Kickstarter office seem to spiral around the open-air courtyard, all glass and light. But some spaces are private, including a half-dozen small offices, cozily decorated with antique furniture. And this private theater, for film screenings, is pleasantly dark, with its western red cedar and sheetrock walls.

iHeartMedia: Welcome to the Future
When Robert Pittman, CEO of iHeartMedia (formerly known as Clear Channel Communications) decided to move the company’s headquarters from San Antonio to New York City, he decided the former satellite office needed an upgrade. The entrance corridor, pictured here, now looks like something straight out of Blade Runner. 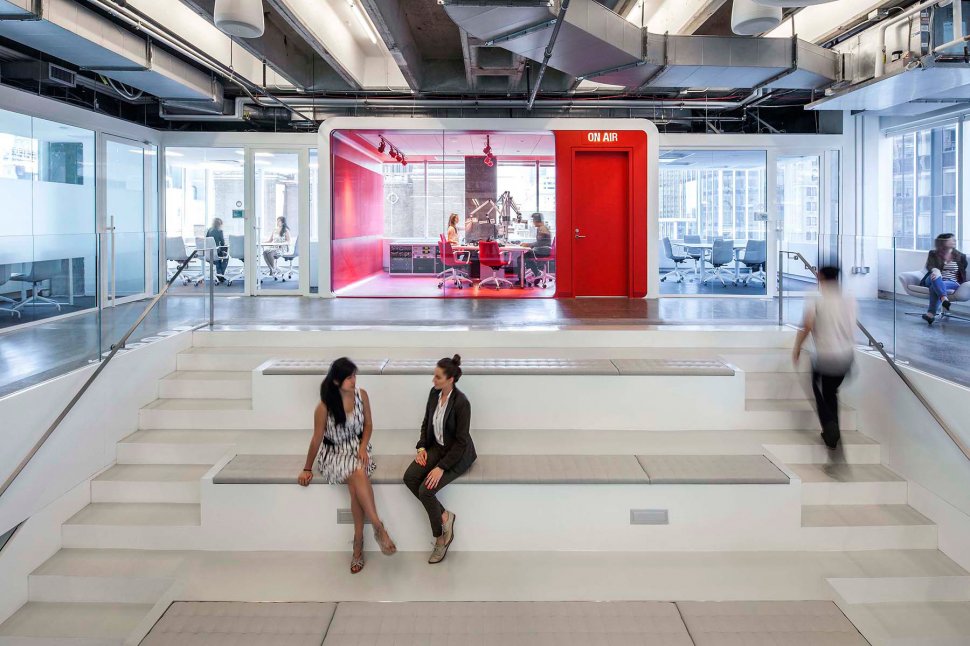 Raw Beauty
To build out the space, Pittman turned to Michael Beneville, an art and design consultant, and Pittman’s Burning Man buddy, according to Interior Design magazine. Beneville brought on Architecture + Information, directing the renowned firm that the space should be stripped clean and left as raw as possible. “No dropped ceilings. No marble. No smoke and mirrors,” Dag Folger, part of the Architecture + Information team, told Interior Design. Beneville called the look “battleship, not a cruise ship.” This particular battleship has a sweeping hybrid-seating-area-and-staircase in its hull. 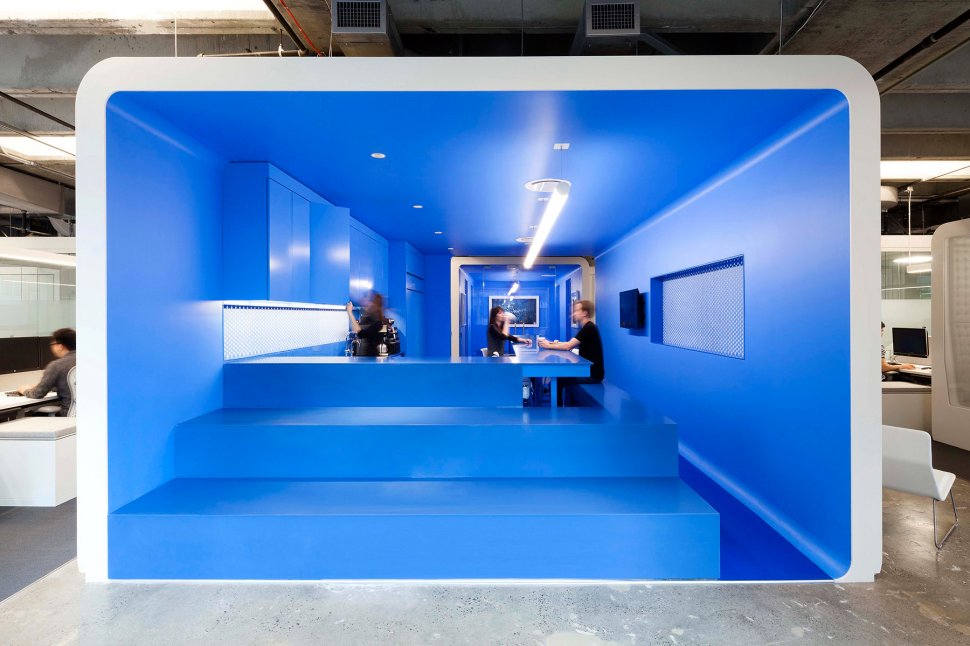 The Meek and the Bold
Shades of grey float around the whole office, surrounding bright pods of color in freestanding conference rooms, and, as pictured here, a kitchen. Private meeting pods allow for quiet time, while most of the desking is quite open.”