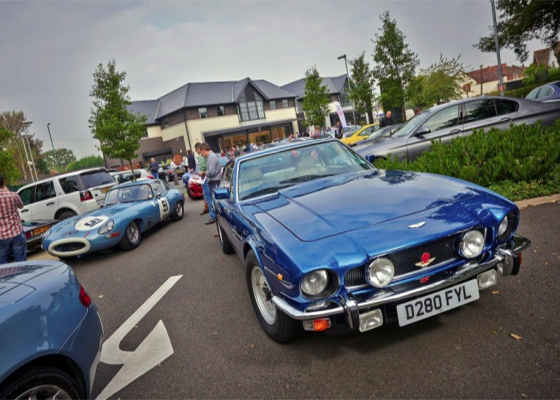 We were pleased to recently sponsor the annual Classic and Sports Car Reliability Run in aid of the Starlight Children’s Foundation. It’s been running for 6 years, is always a great event and we’re proud to be a part of it. Here’s the press release to explain more…

Over 50 of Birmingham’s most well known property professionals took part in a Classic and Sports Car Reliability Run organised by JLL.

Amongst the fleet of classic and sports cars were a McLaren 650S, a 1937 Riley Lynx Sprite, a Triumph Spitfire, Ford Mustang, two classic Minis and an Austin Healey to name but a few.  After starting out at Rybrook’s Specialist Cars in Hockley Heath the cars took a leisurely drive through the Worcestershire countryside to The Shelsley Walsh Hill Climb, a motor sport venue that has been hosting Midland Automobile Club (MAC) Speed Hill Climbs since 1905 and attracting world famous drivers through the ages.

Once at Shelsley Walsh, the drivers enjoyed a pit stop lunch before embarking on ‘spirited runs’ up the 1,000 yard Hill Climb with a 1:7 rise at its steepest point – quite a challenge for a few of the vehicles. The spirited runs were kindly sponsored by EOS Interiors.

Nigel Simkin from the Planning and Development team of JLL who organised the day said: “What started out six years ago as a fun way to raise money for JLL’s chosen charity is now an event that is very much looked forward to year on year.  Our thanks once again goes out to everybody who took part on the day. The support we have is fantastic and each year gets better and better.  We’ve managed to raise over £3,000, all of which will go to our charity partner Starlight Children’s Foundation.”

Peter Leach of Eos Interiors who sponsored the spirited runs added: “It was great to see everybody again.  The JLL Sports and Classic Car Reliability Run is always a great day out and Eos are always delighted to support it.”

Roll on next year…