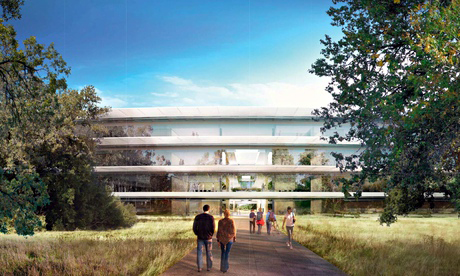 There’s a lot of talk about ‘new ways of working’ at the moment, people working more collaboratively, moving people out of offices and into shared spaces, ‘hotdesking’, all basically trying to get workers to talk to each other and interact more. Offices should be all about people rather than resembling silent factories. The aim being to create a better workplace and happier, more productive staff. This article from the Guardian details how Apple and the BBC have tried to do exactly that…

Apple, the BBC and Google are among big organisations which have adopted designs to reflect new ways of working.

In what was to be his last public appearance before his death, Steve Jobs detailed to Cupertino city council, California, in 2011 the plans behind Apple’s new headquarters – a 71 hectare (176 acre) campus with an enormous O-shaped building for 13,000 employees at its heart.

Jobs claimed that they had the opportunity to construct “the best office building in the world”, the donut-like plan by Norman Foster hinged not just on aesthetics but also ensuring the possibility for collaboration between workers who would be able to walk around the new campus, a concept which is central to how architects now look at the modern office.

Much like when he scrapped plans for three buildings for a new Pixar headquarters in 2000 in favour of one vast space with an atrium at the centre so that employees had to run into each other and interact, the building is aimed at encouraging collaboration – a trend which illustrates that the modern workplace is no longer just seen as the desk but also the area around it.

Simon Allford, a director of architects Allford Hall Monaghan Morris (AHMM), said that when he started his career, design centred around getting from the lift to the desk as quickly as possible. This has changed in the last decade.

“The journey is actually seen as beneficial because as people are working in different ways, you are not expecting them to be only working in one place, therefore work is a kind of continuous activity and you are always thinking,” he said.

The BBC’s new Broadcasting House headquarters in central London has large units similar to American diner booths in common areas where staff can have chance meetings, while the redeveloped headquarters of the Royal Institute of British Architects (Riba) at Portland Place will have a “forum” where different parts of the organisation can congregate. In California, the design of technology firm NVIDIA’s new headquarters takes its influence from computer chip design, where the connections for the flow of information are made before other parts of the chip are added on. With this in mind, stairs were replaced with platforms so that other activities could be carried out there and landings are oversized and used for meetings.

“There are great stories of researchers having incidental space and just bumping into one another and having ideas,” said Stephen Hodder, president of the Riba and chairman of Hodder and Partners Architects.

This move away from the office desk as the main place of productivity is one of the developments in workplace design which has seen the real estate departments of large corporations realise that packing employees tightly into spaces will not necessarily result in greater productivity, according to Philip Tidd from the design and architecture firm Gensler.

“The idea that the desk is a unit of productivity is changing very, very rapidly. Your productivity is not measured by the amount of time you sit behind a thing called a desk. It is what you do. It is about your output,” he said. “It is about getting the balance of specs right so it is not just get everybody in the open, have open plan but have the right balance of spaces where you can get in a zone of concentration.”

This requirement for varied features in office buildings is cemented by the longer hours of many workers, notably in the technology sector, and as a result new offices are now seen to need different areas for working and letting off steam, a tactic most notably championed by Google.

The new White Collar Factory, which is to open beside east London’s “Silicon Roundabout” and designed by AHMM, will have a running track for the companies that take up space there.

“When people work longer hours, you need to escape from work at work and also do different kinds of work in different places,” said Allford. The new Google building in King’s Cross is being designed along the lines of a theatre with the furniture as props which can be moved depending on the needs of the staff, he said.

The all-inclusive use of office space and breakdown of traditional barriers has also been seen in the new BBC building, the interior of which was designed by architects HOK. As all carpets and fabrics have been tested for the screen, filming can now take place across the whole building, according to Andy Baker, who oversees the corporation’s London locations. Radio studios were also rehoused in glassed areas which cut the space they needed and added to the atmosphere, he said.

This breakdown of traditional barriers is also beginning to creep into status and hierarchy, according to Tidd. Those higher up the food chain got bigger offices – culminating in the cherished corner site. But those who usually get the prime spaces are typically executives who are out a lot and do not need them.

The Riba says the demand for high-quality workplaces is on the rise constantly and contributes to the recruitment and retention of staff. “As the country has shifted from being a largely manufacturing base to a service base, I think there is a staggering statistic which is that almost three quarters of the UK’s GDP is generated largely by office service industries. It is incredible to think of that and so the design of those and the optimisation of design of workplace is hugely important to underpin,” said Hodder.

One feature of the new BBC building which raised the ire of staff and jokes in the comedy W1A was the reduction of workstations to 3,500 for the 5,600 staff – the thinking being that shift patterns and mobility would allow for sharing with workers sitting around the campus and create “positive crowding”. Philip Tidd of Gensler said that with mobile working, there is not necessarily the need for a seat for everyone but current “smart” working areas dictate that there is space for a team where there may be eight seats for 10 staff.

So is the desk dead? Not yet. The workplace should be designed around the people who are going to be working in it. And for the vast majority of offices, desks still make a lot of sense. But this kind of thinking can still be applied, for example in the provision of breakout areas, or looking at the acoustics of an office to make sure everyone can hear each other properly, or sympathetic lighting schemes. Not so much the death of the desk, maybe just thinking about new ways of using them…